Chuvashia is in the Volga federal district, and is a component of the Volga-Vyatka economic region. The territory of the republic is 18,300 square kilometers. The population is 1,236,628 people (2016). The capital is Cheboksary. About 40% of the population lives in the countryside. Cheboksary is situated 650 km to the east of Moscow, that is why Moscow time is used here.

As a result of migratory processes during centuries great Chuvash diasporas appeared in Tatarstan – more than 126,500, in Bashkortostan – 117,300, in Samara oblast – 101,400, in Ulyanovsk oblast – more than 111,300. From 10,000 to 30,000 Chuvashes live in Moscow, in Krasnoyarsk Krai, Kemerovo, Orenburg, Nizhnii Novgorod, Saratov, Sverdlovsk, Moscow oblasts, in Kazakhstan, Uzbekistan and in the Ukraine.

Chuvashes are the fifth nation in Russia after Russians, Tatars, Ukrainians, and Bashkirs. Today, in the European part of Russia Chuvashes are the only Turkic people professing Orthodoxy. There are three ethnographic groups of Chuvashes: upper land (viryal, turi) live in the northern and northwestern parts of Chuvashia, lower land (anatri) – in the south of the republic and beyond its borders, middle-lower land (anat yenchi) – in the northeastern and central parts. The Chuvash language consists of two mutually understood dialects: upper land (o-dialect) and lower land (u-dialect).

The National coat of arms of the Chuvash Republic is a bordered heraldic shield of yellow-gold color in the centre of which there is a purple “Tree of life”. It symbolizes not only Revival, but represents people of the Chuvash land in a conventionalized manner. The “trunk” and “branches” of the ethnic Chuvashes living in the native land grow from the purple “field – land”. From the line parallel to this “field” grow “branches” of ethnic Chuvashes living outside the republic. The branches of people – nations living on the territory of modern Chuvashia are also intertwined in the crone of the “Tree of life”. The heraldic shield is crowned with an ancient Chuvash emblem “Three suns” meaning triunity of time – the Past, the Present and the Future, and is framed by a purple gold-edged ribbon, bearing the gold inscription “Чăваш Республики – Чувашская Республика” and stylized image of hop leaves and cones.

The National flag of the Chuvash Republic is a rectangular panel of yellow-gold color, the lower part is purple meaning the Chuvash land, and in the centre there are the armorial emblems – “Tree of life” and “Three suns”.

The name of Chuvashia was given to one of minor planets of the Universe.

Inhabitants of Chuvashia are proud of the fact that three Russian cosmonauts – Andriyan Nikolayev, Nikolai Budarin and Musa Manarov were born and grew up on their land. The Chuvash sportsmen won 14 Olympic medals; 48 times they became champions of the world and European competitions. The names – legends of Peter Egorov, an architect, the author and the builder of the fencing of the Summer garden in Petersburg and of some other constructions, a priest Iakinf Bichurin, a scientist-orientalist, translator, friend of Pushkin, Alexei Krylov, an outstanding scientist – ship builder, Nikolai Ashmarin, Turkologist and Chuvash linguist, corresponding member of the USSR Academy of sciences, Maxim Mikhailov and Nikolai Mordvinov, outstanding actors, Nadezhda Pavlova, a talented ballerina, and those of many other people have forever become part of the history of the Russian state.

The main river of the republic is the Volga. Many big and small rivers (2,356) fall into the Volga River. In the republic there are 754 lakes. Woods cover almost one third of the territory.

Chuvashia is a magnificent cosy corner of Povolzhye with an interesting combination of antiquity and modernity. There are excellent natural conditions, pine and oak forests here. The tourist and sanatorium branch in Chuvash Republic is represented by more than 30 tourist companies and by more than 20 sanatoriums and houses of rest that offer practically all kinds of tourism, rest and business meetings. 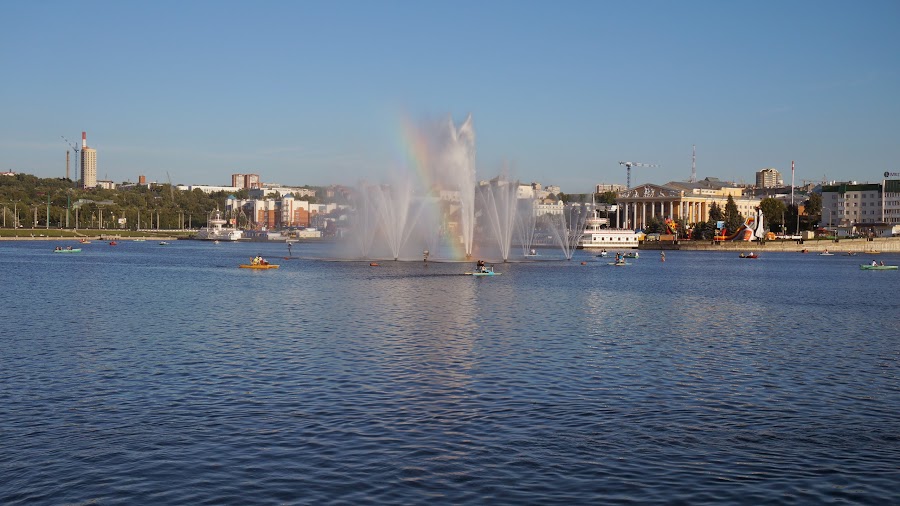 There is a lot to see in Chuvashia – halls and depositories of the Republican state art museum , of the Chuvash national museum, exhibition hall s and art showrooms, galleries, numerous theme museums of the capital and small towns of the republic – the Museum of cosmonautics, Geological museum, Museum of beer, Literary museum, Museum of the Great Patriotic war, Museum of V. I. Chapayev and tens of local lore and ethnographic museums protect unique treasures of the national talent and national wisdom. In the Vvedensky cathedral, a monument of culture of the 17th century, there is a unique relic – icon of the Vladimir God’s mother – used by the father Guriy at laying the fortress.

A favourable geographic situation and climate create conditions for treatment of  many diseases. The Cheboksary regional centre of “Eye Microsurgery” intersectoral research and techno logy complex, the Republican centre of acupuncture and traditional medicine own unique medical technologies. A high standard of curative effect is achieved in the “Chuvashia” mud-bath hospital, as well as in Cheboksary balneosanatorium.

People of “the land of hundred thousand words, hundred thousand songs and hundred thousand embroideries” are of great interest for tourists and are of the largest value on Chuvash land. They have managed to keep the original culture, traditions, crafts and trades – unique embroidery , exotic costumes, ceremonial holidays connected with ancient beliefs of pagan Chuvashes, with preparation of the national drink – Chuvash beer. Chuvashes try to keep all the significant of the past : in the republic under state protection there are 655 monuments of  history and culture, including 177 monuments of  archaeology, 120 – of history, 346 – of  architecture, and 12 – of art. The towns of Cheboxary, Alatyr, Mariinskii Posad, Tsivilsk and Yadrin are included in the list of the historical settled places of the Russian Federation. Valuable buildings – monuments, cultural layer, and units of ancient design have been preserved here. These ancient towns of the Russian province are of great interest in development of tourist-excursion routes in the Volga region. The government of the republic is striving to develop this sphere, new to Russia, – in Chuvashia there have been adopted the law “On tourism” and the Concept of tourism development.

From year to year, talented and original art collectives successfully participate in various international, All-Russian, inter-regional, republican shows-competitions and festivals, representing the multinational culture and traditions of  the republic in proper manner.

Tourists are mostly interested in the Chuvash national originality. One can see wedding ceremonies, ceremonies of seeing conscripts off to the army supported by folklore ensembles and many other things in the system of rural and ecological tourism.

The traditional Chuvash belief was represented by a natural-pagan one. Christianization of Chuvash people began in 1551, when Chuvash land voluntarily joined the Russian state. Now, 95% of the population adheres to orthodox religion, 3% – Islam, 1% – Protestantism, 1% – other religions and denominations. During the last 10 years 157 monasteries, churches and mosques were revived and newly constructed in the republic, financial assistance was rendered to restore five monasteries, 44 temples and nine mosques.